I must say that the research and writing required to submit an entry to the National Votes for Women Trail was relatively easy and a bit of fun. The fun came from getting to know my entrant again, Mattie Cone Sleeth, who also happens to be my great grandmother. I never knew her, she died in 1934, but she made a few dents in life. Not just as a suffragist, a temperance advocate and a Methodist Minister, but as an example for subsequent generations.

My wife and I named our youngest daughter after Mattie, and have told both our daughters of her courage in the Old West as a preacher and in 20th Century Oregon where she fought so hard for a woman’s right to vote.

I would advise anyone who wishes to submit an entry to use the practice form provided by the OregonWomen’s History Consortium. The beauty of the practice form is you can get all your ducks in a row before having to submit the entry. It is much easier.

Sources I used included the Century of Action website; the Historic Oregon Newspaper website; the Oregon Encyclopedia; and the Sleeth Family Collection at the archives of Lewis & Clark College.

May I also add a special thanks to Jan & Greta.

Our new NVWT site nomination highlight is by Kim Argraves Huey, Historian of the Gladstone Historical Society and author of  the books “Images of America – Gladstone,” and “Chautauqua at Gladstone – Historical Fun Facts and Activities about the Third Largest Chautauqua in the United States.”

Gladstone Park was a magical place in its heyday, and researching it is always fun.  Each new venture into the park’s past always brings something new to light. Did you know that in 1893, Gladstone Park served as a military training camp for the Oregon Nation Guard?  Or that in 1907,  Gladstone Park hosted the first appearance of a Ferris Wheel at an Oregon fair?  And even more importantly, from 1894-1927, Gladstone Park functioned as the permanent location of the third largest Chautauqua Assembly in the United States.

During the Chautauqua years, many important and famous people came to Gladstone Park to appear before audiences that numbered in the thousands:  orators like William Jennings Bryan, politicians like Theodore Roosevelt,  educators like Booker T. Washington, and dancers like Isadora Duncan.  But along with the usual variety of self-enrichment classes, outdoor activities, and evening entertainments, Chautauqua gave civic, charitable, and cultural groups an opportunity to promote their causes.  One such group that maintained an active presence at the annual summer assembly was the Women’s Club of  Portland.

Until the Oregon Women’s History Consortium asked the Gladstone Historical Society, of which I am both a member and the historian,  to nominate Gladstone Park for the National Votes for Women Trail, I hadn’t really considered what an important part Gladstone Park played in the women’s suffrage movement.  This experience was enlightening.

Beginning in 1896, leading suffragettes such as Susan B. Anthony, Anna Howard Shaw, and Abigail Scott Duniway began making appearances at the Gladstone Park Chautauqua.  And on July 17, 1912, fifteen hundred women (and some men sympathizers) converged on Gladstone Park for a major Women’s Suffrage Day Rally.  So engrossed in the day’s events, which included speeches, impassioned poetry readings, and the long-awaited pro and con debate about a woman’s right to vote, the attending ladies forgot all about their lunch to sit in place and demand that the argument for the cause continue.  It did.  Their zeal changed minds.

The process of nominating a site for the National Votes for Women Trail is easy.  I would recommend doing all the groundwork (research) first.  It can take time.   Even searching your own historical, already-researched, files can take time.  And do use the practice form.  Copy and paste makes filling in the final online application a breeze. . .except,  I did have one surprise.  My perfect, concise, and precise 85 word nomination summary was rejected for too many words.   After three failed attempts at downsizing, the online form finally accepted 67 words/469 characters with spaces–an even more concise and precise, but equally perfect submission (in my humble opinion).

Interested in doing your own site nomination and helping us put Oregon on the NVWT map? Send us an email at oregon2020@oregonwomenshistory.org and we’ll help you get started! OWHC is working to nominate more Oregon sites on the National Votes for Women Trail (NVWT) map, which “seeks to recognize and celebrate the enormous diversity of people and groups active in the struggle for women’s suffrage.”

Currently, the map has 1,386 sites total nationally, with 13 sites in Oregon. The 1912 suffrage campaign was truly a statewide campaign, and the Oregon Legislature voted unanimously to ratify the Nineteenth Amendment in 1920. We believe every county in Oregon should be represented on the map.

We asked Mary Hansen of Portland City Archives and Records to do a site nomination for the National Votes for Women’s Trail (NVWT) map. What follows is an account of her experience. 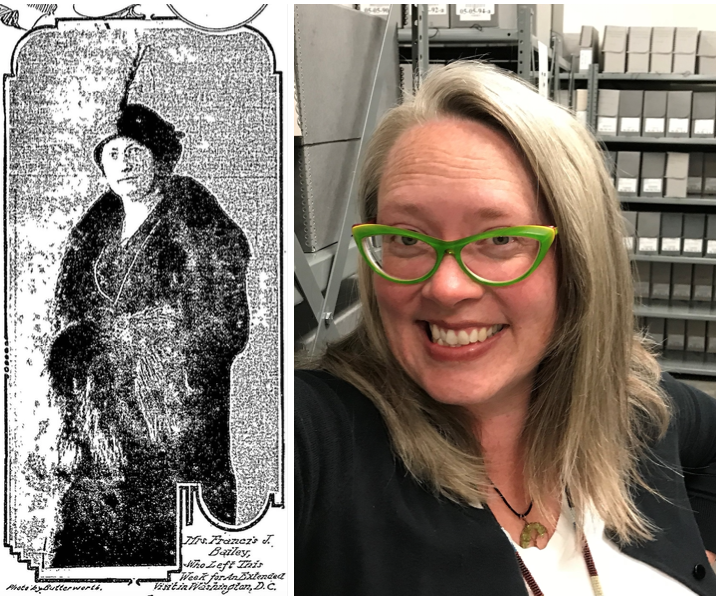 When Jan asked me to be “Test Mapper” for the National Votes for Women Trail, I said I would be happy to help as best I could. I am not a public historian or a historian of any kind. As an archivist, my focus is on finding the materials and letting other folks write up the history. I was glad that there is a place in this process for multiple kinds of skill sets. I also felt reassured that Jan would review my work and answer my questions about the process.

To begin, each volunteer “mapper” is given articles, census data, Polk City directory information for a particular group, place or person. I did a little more digging, but I found the materials already collected were just what I needed.

As I read through the materials for Eva Bailey (Mrs. Francis James Bailey), I was surprised to find she was an anti suffragist. She placed editorials and paid advertisements in newspapers all over Oregon talking about the dangers and burdens of women voting.

“To put upon these women a responsibility from which they have hitherto been exempted and which they do not wish to assume is not  ‘Woman’s Rights’.” Woman’s Suffrage Opposition Strong, Mrs. Francis J Bailey, The Times Herald (Burns)_Oct 19, 1912, 1

The most surprising language was from a speech given by Miss. I.T. Martin from New York. Bailey, President of the Association of Women Opposed to Equal Suffrage introduced her.

“We hear a great deal about the right to vote. We all know that there is no such thing as an inherent right to vote. Voting is a duty, not a privilege, and women have been exempted from this duty and not deprived of a privilege. The obligation to vote carries with it other obligations – the right to bear arms if need be, to quell riots, to fight fires, to serve upon juries, to act as policemen. Women are absolved  from these duties, just as they are absolved from the duty of voting.”

The process of entering information is quite simple and getting ii typed up in the sample form/template beforehand makes it even easier. And I was reminded again, that history repeats itself over and over.

Interested in doing your own site nomination and helping us put Oregon on the NVWT map? Send us an email at oregon2020@oregonwomenshistory.org and we’ll help you get started!